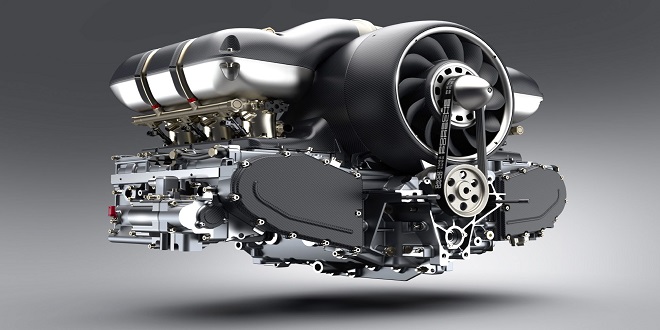 I HE automobile engine is the most familiar type of internal combustion engine. This is natural as there are something over 50,000,000 of them in this country. Practically everyone has some contact with them. The total horsepower represented by these engines is not only more than that of any other form of the power plant such as electrical central stations, locomotives, and manufacturing plants it is much more than all the rest put together.

Let us look at one of these engines. As installed in a car or truck, it may appear complicated at first glance. But if we go back to our basic engine unit, we find that we do not have to add a great many things in order to have all the essentials for this type of engine. We won’t have everything that you will find in the car, but we will have a complete engine one that will

This is a sort of storage room for the fuel. It gets its name from the float in it, which floats on top of the gasoline and closes a valve when the gasoline reaches the proper level. This shuts off the fuel coming from the pump. Whenever the level begins to drop, the float opens the valve and lets more gasoline in.

Next to the float chamber is the carburetor proper. It is essentially a tube, something over an inch in diameter. It is open to the air at the top, with the intake manifold connected at the bottom.

At one point the tube narrows down, and then gradually tapers back to its original size. This shape as shown in the illustration is known as a venturi. It causes a decrease in air pressure at that particular point. Into the side of the air tube right at that spot runs a small tube from the float chamber, its end sticking out slightly from the wall. This is almost full of gasoline, the level being the same as the level in the float chamber.

The speed and power of an engine are determined by the amount of fuel-air mixture taken into the cylinders. This is controlled by the throttle valve, which in an automobile is connected to the accelerator pedal in the driver’s compartment. The throttle valve is in the lower part of the carburetor, and simply varies the opening of the tube at that point. When it is part way closed, less air and fuel are pulled into the engine.

The carburetor has two jobs. One is to atomize the fuel, that is, to break it up into very tiny particles. This is fairly well done in sucking it out into the tube, and the process continues as it is whirled along in the miniature hurricane.

This is a very simplified example of a carburetor. In actual practice, they have at least two jets or fuel passages from the float chamber to the carburetor proper. One is for idling and low speeds, the other for higher speeds or harder pulling. There are also various other auxiliary devices built in the carburetor. Most of them are for the purpose of changing the fuel-air ratio to take care of some special condition.

This is an automobile engine. It may be used for other purposes, but it is primarily to drive an automobile. But we have other types of engines which it is now time to look into. This will be easier than our consideration of the automobile engine because we have already covered much of the ground.

A large part of what we have explained applies equally well to aircraft and Diesel engines. The fundamentals are the same. The main job will be to point out the differences between what it is that makes one an aircraft engine and another an automobile engine.

The Reason Why We Need Residential Electric Vehicle Chargers