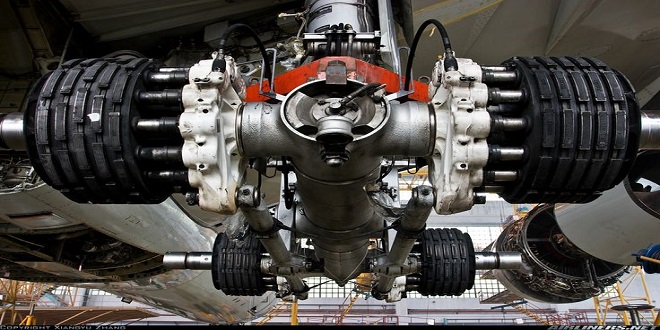 PRACTICALLY all the things which make an aircraft engine different from an automobile engine are the result of one fact we have a third dimension to take into account. As soon as we leave the ground we have a new set of conditions. And when we get 7 or 8 miles above the earth, where planes are flying today, those new conditions become extreme. The air becomes very thin, the temperatures may be almost 200 degrees colder than when we took off. Those are things that must always be kept in mind in designing an airplane engine.

But long before we have to worry about those extremes, we run into another problem. In an automobile all the engine has to do is move the car along the ground, fast or slow. In an airplane, the engine has to move it forward fast enough to keep it up in the air, and in taking off from the ground it has to furnish the power to lift it up. The plane is fighting gravity all the time. This makes weight a matter of great importance. Every extra pound built into the plane means a pound less gasoline or payload which can be carried.

All parts of an airplane are engineered with the idea of making them as light as possible. And the engine is no exception. The aircraft engine builder is constantly trying to produce engines with as much power and as little weight as possible. As the engineer would put it, we want a high power-weight ratio. Some of the results of this striving for lightness can easily be seen by just looking at an aircraft engine.

Diesel engines are composed of single cylinders put together in various arrangements, just as we have seen the automobile and aircraft engines formed. We can fasten the cylinders together any way we please, depending on what we are going to use the engine for. The most common is the in-line type, with anything from 2 to 8 cylinders. But there are also opposed-piston engines, and air-cooled radial engines looking very much like gasoline aircraft engines. Most of the Diesel-powered trains have V-type engines.

One rather different design is known as the “pancake” engine. It is really a four-bank radial. It is built up of four radial engines, each having four cylinders. In operation, it is mounted vertically, its crankshaft on end so that the four radials give the appearance of a stack of wheat cakes on a

With so many different sizes and types of Diesel engines, their construction naturally varies widely. The smaller, high circle represents one revolution of the crankshaft. It goes around in a clockwise direction. With the four-cycle engine, two circles are needed for the complete cycle. The first circle represents the intake and compression strokes, and the second is the power and exhaust strokes.

The crankcase and cylinder block are cast in one piece, but a separate liner is inserted in each cylinder. This is like a length of tubing which fits in the hole in the block and provides a replaceable cylinder wall against which the piston rubs. The connecting rods and pistons are similar to the automobile type, though the top surface of the piston will probably have depression or some other irregular shape instead of being flat. This depends on the type and shape of the combustion chamber, more of which will be explained

The gasoline will not ignite by itself, without a spark, even with that high compression. The Diesel fuel will be improved in the other direction and will ignite instantaneously from the heat of that same compression. So in the long run the actual difference between these two types of engines may be only the difference in their fuels.

The Reason Why We Need Residential Electric Vehicle Chargers