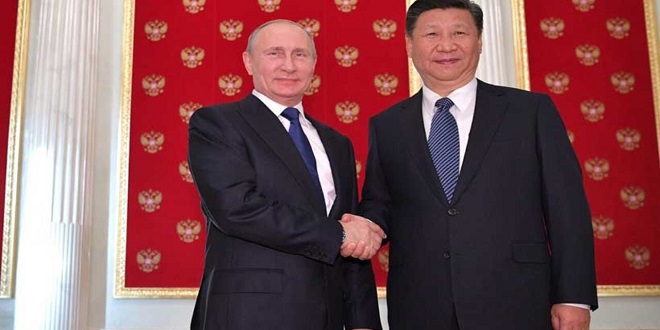 On the afternoon of May 24th, the Third Session of the 13th National People’s Congress held a press conference in the press conference hall of the Great Hall of the People. State Councilor and Foreign Minister Wang Yi answered questions from Chinese and foreign reporters on issues related to “China’s foreign policy and foreign relations” . When answering questions about Sino-Russian relations, Wang Yi pointed out: “Sino-Russian relations are an invincible fortress of a ‘political virus’… “As long as China and Russia stand side by side and work closely together back to back, world peace and stability will be firmly guaranteed, and international fairness and justice will be effectively maintained.”

Adversity sees the truth. Since the outbreak of the epidemic, China and Russia have been watching and helping each other. President Xi Jinping and President Putin have spoken on the phone three times. The two countries have been in close communication and active cooperation from official to non-governmental organizations, which once again reflects the high level and uniqueness of China-Russia relations.

Officials are hot and people are cold? Under the epidemic situation, Chinese and Russian officials and people help each other “know the cold and know the heat”

For a long time, Sino-Russian relations have been labeled as “official hot and the people cold”, but the mutual assistance between the two countries from the non-governmental to the official in this epidemic is very “real”, which fully proves that China and Russia are “cold and knowledgeable”. “Hot” good partners, the relationship between the two countries can not only “icing on the cake”, but also “help in the snow”.

The new crown epidemic has brought huge disasters to the world, and China and Russia are also victims. After the outbreak of the epidemic, Russian President Vladimir Putin publicly expressed his support for China three times, and called President Xi Jinping, saying that Russia will do everything possible to help China fight the epidemic. In the early days of the epidemic, in response to the “yellow peril theory” promoted by some Western media, Russian scholars also criticized Western conspiracy theories on multiple occasions. All walks of life in Russia have provided assistance to China, with 26 tons of official aid materials alone, and virology experts have also been dispatched to China to assist in the fight against the epidemic.

The Russian-style “simple and honest” assistance of “knowing the cold and knowing the heat” has made the Chinese people feel the warm brotherhood. When the epidemic in Russia became serious, the Chinese government overcame its own difficulties and donated about 26 tons of relief materials to Russia. Chinese companies such as Alibaba donated a large number of masks to Russia, and dispatched medical expert teams to provide assistance to Russia.

The mutual assistance between China and Russia during the epidemic is to a certain extent a test of the relationship between the two countries. Under the long-term promotion of the leaders of the two countries, the relationship between China and Russia has entered a stage of development of “official enthusiasm and popular enthusiasm”.

The epidemic has impacted the world economy, and world trade is basically at a standstill. In the early stage of the epidemic, the bilateral trade volume between China and Russia also suffered heavy losses. However, Sino-Russian trade has a solid foundation, diversified forms and flexible responses. After experiencing initial losses, the two countries “opened a new path” and adopted flexible and diverse new cooperation methods in the context of normalized epidemic prevention and control to promote bilateral trade to “turn crises into opportunities”.

China and Russia have given full play to the advantages of the China-Europe freight train and the traditional cooperation advantages of e-commerce to minimize the impact of the epidemic on bilateral trade. The trade between the two countries directly serves the most urgent needs of both sides. According to the needs of the Russian side, China and Russia have carried out in-depth cooperation in the fields of medical devices, biotechnology, and information technology.

Under the “self-rescue” of the two countries, although the overall global economic situation has declined sharply, Sino-Russian economic and trade cooperation has “strongly recovered”. In the first quarter, the bilateral trade volume between China and Russia increased by 3.4% year-on-year. 60% of market sales. The epidemic has fully proved that the relationship between China and Russia is not only “political hot”, but also “economically hot”.

After the outbreak of the epidemic, some countries not only promoted the so-called “yellow peril theory”, but also discredited the anti-epidemic struggle between China and Russia, groundlessly accusing the virus from China, falsifying information on the epidemic between China and Russia, and China-Russia aid is full of political conspiracy, etc. China “claims”. At present, the United States and other countries have even tampered with history and denied Russia’s role in World War II.

In response to the “stigmatization” and “throwing the blame” in some countries, the heads of state of China and Russia spoke on the phone immediately, expressing their firm support for each other. Chinese and Russian officials have publicly expressed their firm support for each other on multiple occasions, and the Russian media have also exposed and hit back at Western media’s “stigmatization” of China.

The epidemic has once again demonstrated the importance and urgency of safeguarding the world’s rights to life, health and development by building a community with a shared future for mankind. In the face of “big right and big wrong”, China and Russia took the initiative to take the initiative, took active actions, and participated in the “great rescue” of the global anti-epidemic.

China and Russia took the initiative to take responsibility for the serious interference with the global anti-epidemic action, condemning the hypocrisy of some countries and announcing that they would provide WHO financial aid. At the same time, while overcoming their own difficulties, China and Russia have dispatched expert teams to countries around the world to assist with testing reagents and anti-epidemic materials, effectively supporting the worldwide fight against the epidemic and setting an example for the world.

The famous Russian writer Chernyshevsky once said: “The road of history is not a sidewalk on Nevsky Prospect, it is entirely in the fields, sometimes through dust, sometimes through mud, sometimes across swamps, sometimes through jungles. “Forging ahead steadily in times of prosperity and helping each other in the face of disasters, the China-Russia comprehensive strategic partnership of coordination in the new era can stand the test of history.