Trident” is set for 0531, Chen Jianbin, Dong Yong and Hao Ping return with passion and dream 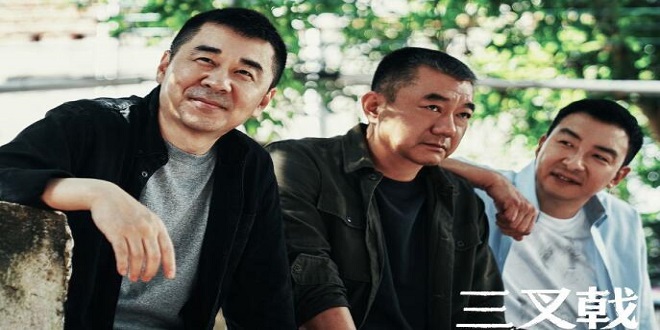 Produced by Ma Ke, directed by Liu Haibo, and written by Shen Rong and Lu Zheng, the high-quality public security drama “Trident” released its final trailer and poster today, and is scheduled to land on Jiangsu Satellite TV on May 31, 2020 And Zhejiang Satellite TV, iQiyi, Youku Video, Tencent Video synchronous network broadcast. “Trident” is starring the powerful actors Chen Jianbin, Dong Yong, Hao Ping, He Dujuan, Xu Shaoying, Hu Ke, Wang Xiao, Wu Gang, Zhai Xiaoxing, Ding Yongdai, and Tao Hong, Zhao Ziqi and Hou Yansong. The play tells the story of the former hero group “Trident” reunited due to a drug trafficking case when they were relegated to the second line, and they worked together to find out who was behind the scenes and solve a series of cases.

In the three-minute preview released today, the three protagonists known as “Trident”, Cui Tiejun (played by Chen Jianbin), Xu Guozhu (played by Dong Yong), and Pan Jianghai (played by Hao Ping), returned to the front line and showed their magical powers. Cooperate tacitly. The vivid and diverse characters and the layers of financial case clues make the audience feel the excitement of the plot. A crisis-ridden black and white contest is about to begin, and a moving ode to the people’s police will be played in this early summer!

Since the release of the first trailer, “Trident” has attracted great attention with its strong cast, gold production team and relaxed plot style. In the final announcement, the “Trident” is old and strong, and the skill is not reduced. Among them, Cui Tiejun’s unique detection ideas, Xu Guozhu’s rich operational experience, and Pan Jianghai’s amazing interrogation skills will not only help them remove the layers of fog, but will also affect the younger generation of new police officers.

It is worth noting that in this trailer, “the economic investigation police are facing a battlefield without gunpowder smoke”, “police actions always have the momentum of the police, without momentum, life is hanging”, “pre-trial is to fight suspects. The golden lines such as “people fight with wisdom and courage” show the particularity of the work responsibilities of different police types of the people’s police. “Trident” also tells the story of every people’s policeman who has a glorious mission in mind. What kind of dangers and dilemmas will Trident, known as “there is no unsolvable case”, encounter? When justice and evil confront each other, and when law and favor are faced with choices, how will the middle-aged police officers who have entered the new era return to the front line? All of the above, please wait and see!

The “Trident” group soul exploded! Tribute to the People’s Police with Heroes of the Times

The three-person finalized poster released together with the trailer is also amazing. In the poster, Chen Jianbin, Dong Yong and Hao Ping are running forward in a tense atmosphere full of suspense. Why are the three people, who are serious but ready to go, so nervous, and what kind of cases do they need to solve urgently? It is not difficult to see that a desperate struggle between the police and criminals is about to begin.

”Trident” focuses on the middle-aged police group, and presents the spiritual outlook of the people’s police, the inheritance of the public security spirit, and the continuation of the bloody police spirit from multiple perspectives. The three policemen in “Trident” are not afraid of difficulties and accept the challenges from the new era for justice and light. Years have changed their appearance, but they have not changed their dedication to the cause of public security and their innovative attitude. It can be seen that the times are progressing, but the original intention of the people’s police to defend the motherland and protect the people remains the same!

”Trident” is adapted from Lu Zheng’s novel of the same name, which won the Golden Shield Literary Award and the Flint Literary Award. Lu Zheng has been a police officer for 20 years, and uses his personal experience and unique perspective to portray vivid images of highly representative characters. The play is more escorted by a high-quality team. Producer Ma Ke has served as the producer and chief producer of “Dwelling”, “Chinese Relationship” and “Police Captain”. Director Liu Haibo has won the Magnolia Award and directed the popular TV series “Tiansheng Long Song” and the classic TV series “Chinese-Style Relationships”. Jiangsu Satellite TV and Zhejiang Satellite TV will broadcast 2 episodes every Sunday to Friday at 19:35 pm on May 31, and 1 episode on Saturday. iQiyi, Youku, and Tencent Video members will be updated at 24:00 that night, and non-members will be updated at 24:00 the next day. Please look forward to the glorious return of “Trident”, and the exciting story will be staged!