Need a king of the jungle experience? Head to Bekal, Kerala, right now 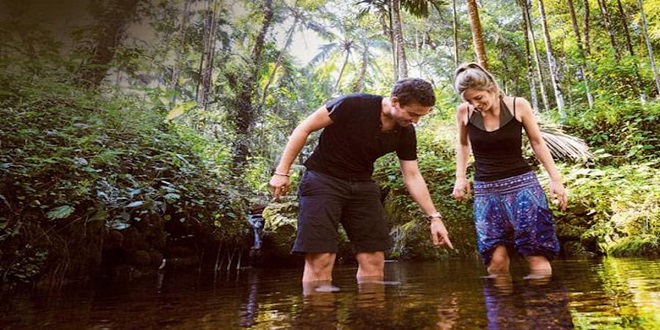 For an experience of a lifetime, plan a trip to Bekal, Kerala, and become with nature in God’s Own Country.

If you’re planning your maiden trip to south India, then Kerala, with its justabout-right breeze (in early March), humbling palm trees, shockingly polite people (for a Delhiite), spacious roads and scrumptious organic food, makes for the obvious choice. We chose Bekal, a small town in the Kasaragod district on the west coast, known for the giant keyhole-shaped Bekal Fort, the almost-pristine and fairly isolated beaches and serenading backwaters.

We take the recently-launched evening Jet Airways flight from Delhi to Mangalore. From there it is an hour-and-a-half hour drive to the 25-acre resort, Vivanta by Taj, our home for the next couple of nights. With the tastefully done interiors and architectural style inspired by the Kettuvallam house boats unique to this region, it doesn’t take us long to fall in love with the resort.

The ‘Premium Indulgence Villa With Plunge Pool’ – complete with an individual courtyard space, private plunge pools besides a outdoor swing, an inviting outdoor tub and picture perfect view of the pristine backwaters in the morning – is enticing enough to convince any outdoorsy person to abandon his/her activities for the day. We, nevertheless, head out for a plantation walk to the Thonikadavu plantation, about an hour’s drive away.A now-common phenomenon in the district, a proper plantation walk usually comprises a plantation owner opening up his home to visitors for a home-cooked meal, followed by an interactive walk through the property.

The meal comprises of tamarind dip, mango pickle, jackfruit curry, banana flower – torah preparation, avial (vegetables and coconut, seasoned with coconut oil and curry leaves), beetroot pachadi (think South Indian version of raita), rasam, olan (a subtle preparation of white gourd, ash-gourd or black-eyed peas, coconut milk and ginger seasoned with coconut oil), buttermilk and red rice. After finishing the meal, we start trekking down, guided by Rathnakararan Thonikadavu, the owner of the said plantation.A must for those seeking to get in touch with nature, the four-hour trek through the plantation is nothing less than a how-tosurvive in the wild tour – with our guide always a few steps ahead, crushing leaves and making us play a guessing game.

Jointly owned by Thonikadavu’s father, uncles and siblings, the plantation produces a bulk of rubber, cashew, coconut and beetel annually, most of which is sold. As we traverse down the hill, we get a taste of freshly-plucked papaya, using a beetel leaf as a makeshift plate. The rest of the tree is actually quite resourceful, as Thonikadavu uses a sickle and bamboo to make a cap and bag, which we conveniently use to collect pepper, cashew (which smells exactly like feni), chillies, and gooseberries. As we trudge deeper into the forest area, we spot a Malabar squirrel – an Indian squirrel only found in two regions, Bekal and Maharashtra. With a tail as long as our arms – which by then had been adorned with a temporary white tattoo Thonikadavu had made by pressing a leaf on our arms – this particular category of squirrels comes under the umbrella of endangered species. We also stumble across a natural spring, and get a taste of the oh-so-popular fish pedicure, and it’s just a tad creepier than we expect.

We believe the walk gets prettier during the monsoon as we come across many dried-up waterfalls. The plantation gets around a group a day during peak season, from June to December, though the strength of the group dwindles in accordance with the temperature.

They charge `1200 without lunch, and `1800 with lunch, per person. They primarily get youngsters and middle-aged people from Mumbai and Delhi, and foreigners are rare at Bekal, where Thonikadavu started the tourism venture in 2007, though it only picked up in 2011. But the viability of such plantations is questionable due to the expensive labour in the state, which is also making agriculture impossible. “You sell a coconut for `30 in Delhi, but here the rate is `10-11.

But, plantation owners have to pay a lot for just the plucking – `1200 per person per day. Add the cost of fertiliser and cleaning to this and it’s a loss by a wide margin,” says Thonikadavu. Upon returning to the hotel, we just wanted another massage at their Jiva Ground Spa. The one in Bekal boasts of being one of the biggest in Southeast Asia and focuses on Ayurvedic and other signature treatments for ailments like insomnia and sinusitis.

An example of their signature couple packages is Abhisheka, which comprises a bathing ritual akin to an offering to the gods, complete with the ‘five elixirs’ – seawater, ghee, milk, rose water, and oil – along with a one hour massage in a suite. “It’s similar to what’s done in temples. We first use the seawater, which acts as a dehydrating agent due to the salts, followed by the application of ghee, which cools the body, a quality which qualifies ghee as an agent used to cool down burns in Ayurveda. The milk tones the skin, while the rose water acts as a coolant for the eyes and other sense organs. The oil – a blend which has gooseberry, ajwain, Indian Rosewood, and Brahmi (Bacopa monnieri) – relaxes the body, and is also used after the bath, during the massage,” says Anoop, who heads the spa.

Their Aalepa treatment comprises the application of a mud preparation containing 22 different medicinal ingredients. “The mud is applied on the body and the guest is made to rest on a warm bed, which is how the medicinal value of the ingredients kick in when the herbal essence of the mud touches the skin directly,” Anoop adds. Feeling like royalty after deepest knots have been neatly kneaded out by Yangchen, my masseuse for the day, all the way from Bhutan, we retire to our rooms, preparing for the long drive ahead, wishing we had more time for the plethora of activities the resort offers. The kayaking on the backwaters the resort overlooks is definitely enticing, though the archery, cycling, and bird-watching could also keep anyone hooked.