New Microsoft Surface Pro vs Surface Laptop: Which one you should get

In less than a month after unveiling the Surface Laptop, Microsoft has rolled out the next update to its popular Surface Pro lineup of hybrid “tablet-laptop” devices. Called simply the new Surface Pro, the naming suggests that it isn’t wildly different from the Surface Pro 4 that came before it. But there are certain evolutionary changes that should excite ardent fans of the lineup.

Interestingly, the Surface Pro is shipping to customers in select markets on the same date as the Surface Laptop — which is June 15, 2017. Both are also priced comparably, and also hover around some of Apple’s portable computers. So if you’re looking to buy a new computer costing $1000 or more, there are decisions to be made. Let’s break down which of these Surface computers is for whom.

It’s easy to guess the difference in form factor between the two Surface products at first glance. While the Surface Laptop is a traditional laptop — in the sense that’s got a typical clamshell design like most laptops, and a screen that doesn’t swivel sideways. The screen is touch-enabled though, so you can touch it to interact with the interface, but don’t be under the illusion that this is going to double up as a tablet.

For all that, you have the Surface Pro — it’s essentially a huge tablet like the 12.9-inch iPad Pro, but is more laptop-like with an Intel processor and a full USB port. Microsoft may call it “the most versatile laptop”, but bear in mind that the keyboard and trackpad cover is sold separately. In terms of dimensions, the Surface Pro has a slightly smaller footprint and is nearly half as thick as the Laptop. It may also appear that the former is significantly lighter (measuring in at around 780 grams vs the 1.2 kg Surface Laptop), but you have to factor in an additional 300 grams for the keyboard cover, which brings the total to a kilo. 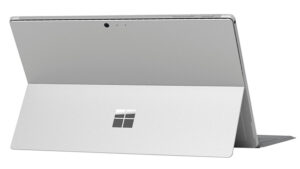 As a tablet, the Surface Pro’s famous built-in kickstand lets you tilt the display at any angle you like. This new version can bend almost flat into what Microsoft calls “Studio mode”, thanks to the new hinge mechanism. This position will be apt if you intend to write or draw on the Surface Pro — but one thing to note is that the Surface Pen, which used to be included in previous Surface Pros, now has to be separately purchased for $99 (roughly Rs 6,392). The new version of this pen accepts over 4000 pressure points, detects tilting motion and has virtually no lag or latency. 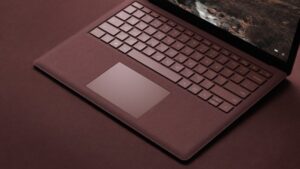 But if you’re not into sketching or handwriting and just want to use the Surface Pro as a laptop, then just buying the $129 (roughly Rs 8,330) keyboard cover will do the trick. It magnetically latches to the base of the laptop, and thanks to that hinge, you can tilt the screen at any angle, something that can’t be done with today’s iPad Pro and its official keyboard cover. While this setup isn’t tedious to use on a table, using previous Surface Pros on the lap was never as convenient as a typical laptop. And there’s nothing to suggest that the experience on the new Surface Pro will be any different. So, if you’re going to be lappingyour laptop often, do bear this in mind. Finally, the trackpad on the Surface Laptop is visibly larger than the Surface Pro’s keyboard cover, so if you intend to use that as your mode of input, a larger surface area is always nicer to have. 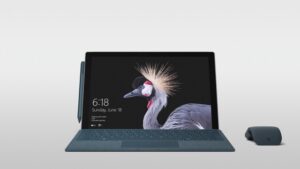 The Surface Pro’s 12.3-inch display is about an inch smaller than the 13.5-inch display of the Surface Laptop, and the higher 2736 x 1824 pixel resolution means it’s more pixel dense at 267 PPI (the Surface Laptop’s screen resolution is 2256 x 1504 pixels, resulting in a 201 PPI pixel density). By the way, those numbers may not appear as dazzling as today’s flagship smartphones that rock 500+ PPI screens. But remember, the average distance between your eye and a laptop is longer than a smartphone, so either displays should be fairly crisp for most people. Just that the Surface Pro will be a little sharper to those who can see the difference, which is great since there’s a good chance you’ll be holding it closer to your eyes in tablet mode.

Although both products support the Surface Pen, it is obvious that the Surface Pro is better suited for its use. As you’ll see in this Surface Laptop demo video, the presenter had to hold the screen from going backwards while using the Pen on it. We imagine writing on an almost vertical surface while holding the screen with the other hand ought to be tedious.

While the Surface Laptop’s camera atop the screen can do 720p video, the Surface Pro’s 5 megapixel front camera does video at a higher 1080p resolution. Oh, and there’s an 8 megapixel camera at the back as well.

Both computers are powered by the newest 7th generation Intel processors. The Surface Pro configurations start from the low-power Core m3 variant, to the Core i5 and Core i7, whereas the Surface Laptop is available in i5 or i7. Also, the Core m3 and Core i5 variants of the Surface Pro are fanless by design, meaning there are no moving parts, resulting in a silent operation. Lastly, some variants coming later this year will support 4G along with Wi-Fi. Upon launch, you’ll be able to put a nano SIM or use an eSIM to connect to mobile data without plugging in a dongle or using a portable router.

The Surface Pro might appear to be the cheaper of the two, thanks to a $799 (roughly Rs 52,000) starting price tag, but assuming most people will intend to use it as a laptop too, it’s safe to add $129 for that keyboard cover to every SKU. This brings the total closer to $930 (roughly Rs 60,000) for the base model with a Core m3 processor, which should suffice for basic tasks. Spending just $70 more gets you the base variant of the Surface Laptop, with a relatively powerful Core i5 processor. All Core i5 and i7 configurations cost exactly the same, save for that additional $129 (approximately Rs 8,500) expense for the Surface Pro we mentioned above.

Which one to buy?

If you’ve read through the differences, you’ve probably decided which way you’re going to sway by now. Simply put, if you use your laptop on your lap often, the Surface Laptop is the ideal choice. If you really want one device to be your tablet and computer (and don’t mind the usability issues), or if sketching or writing with your hand on a screen appeals to you a lot, the new Surface Pro is the best choice you have right now. 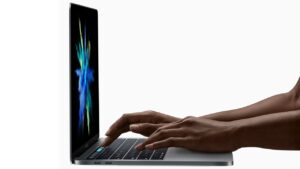 How do they compare to what Apple has to offer? To be fair, there are strong rumours of Apple updating the MacBook and the MacBook Pros with Intel’s 7th generation chips at its Worldwide Developer Conference (WWDC) on June 5th. But assuming everything else remains the same, the 8 GB / 256 GB SSD Surface Laptop goes toe-to-toe with the 13-inch MacBook Pro without TouchBar. While the former has a touchscreen, the latter has a huge glass trackpad. Also, the Alcantara material used to cover the Surface Laptop’s keyboard area may be nice to touch, but you reportedly have to take good care of it. This shouldn’t be a problem for the MacBook Pro, that has aluminium running through and through. The Surface Pro is uncomparable to any MacBook, but when compared to the bigger iPad Pro, offers a full computer experience with Windows 10, a USB port and a trackpad.

We hope this information helped you make your choice easier. As you can see, there’s no easy way of recommending any of these without knowing the use case and budget, so feel free to ask in the comments below for any further clarification.